note: “holoblomo” stands for Horribly Local Blogging Month, my response to National Novel Writing Month (NaNoWriMo) that happens every November. The NaNoWriMo challenge asks writers to compose 50,000 words in a month; I chose 10,000 as my goal. Enjoy.


So here we are.
And I am thinking about pie. It’s that time. Time for pie.
Time to pick up the pie, or make the crust and buy the apples, but who am I kidding... it’s time to pick up the pie.
My favorite pie at Thanksgiving is my favorite pie in New York City: the sour cream apple walnut pie from the Little Pie Company. It is a staggeringly excellent pie. It is also thirty dollars.


There was a time in my life when I would have been offended and appalled at the notion of spending thirty dollars for anything edible, let alone a pie. I remember an evening long ago, my very first year living in the city. A group of Muppet folk were having a spontaneous dinner at the old Iridium restaurant at Lincoln Center. It was the first fancy-ish place I’d been in New York. And when I looked at the menu and saw that the entrees were between twenty-five and thirty dollars, I whispered angrily to my husband, who was then only my boyfriend:
This is ridiculous! This is offensive! I refuse to pay this kind of money! It’s just dinner!
See, the student loans had recently come due, and I was temping whilst trying to find a foothold as a Muppet Performer, and the sinful co-habitation with my someday-husband was the only way I could afford to live in Manhattan. Thirty dollars was almost an entire day of take-home pay for temps like me. Hell, just the year before, in college, I rarely had more than thirty dollars on me at any given time.
My husband-then-boyfriend chuckled at that, and assured me he’d cover my bill, but I was still fuming. I was with a table full of people who were working steadily in television and could easily afford a thirty dollar entree, to say nothing of the wine, and I, scrabbling as a wanna-be, could not. I’m not sure if I was more jealous of my table-mates or more righteously indignant at the sheer fact that any establishment could charge so much for victuals.
And then, suddenly but not overnight, I could afford a thirty dollar pie.
Of course, for caloric and budgetary reasons, it is a rare indulgence reserved for the holidays. But it is an amazing pie. The apples are crisp, and sliced razor thin, layered scores deep among the rich sour cream filling, nestled in a cinnamon-infused crust, and covered with a thick, powerful cement of a streusel packed with walnuts. It is a heavy beast, and ounce-per-ounce, worth every penny.
Last Thanksgiving, in a burst of frugality and ambition, I decided to make my own pie. Nothing fancy, just an ordinary apple pie. Trader Joe’s frozen crust, fresh Macoun apples, lots of cinnamon.
It looked angry. 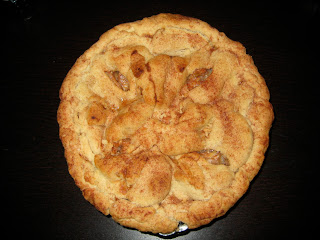 And while it was an okay pie, it’s mediocrity reminded me of why it took me so long to learn to love pie. I was a cake girl until my twenties, when finally, the right pie came along and opened the door to the joys of a proper crust. Where had these pies been all my life? How many nights of pie love had I missed out on? Life was short. Too short for my attempts at pie-making, too short to miss out on the warm embrace of better pies.
So I finally figured it out. Thirty dollars, in any economy, is a small price to pay for love.
And that’s 9839 words.
Yes indeed. Welcome to me.
Posted by Stephanie D'Abruzzo: blogmastrix, actress, and puppet-ette... at 12:30 AM