So here we are.
It only makes sense on this Fourth of July, the summeriest day of the summer, to write about the fact that I am very concerned about my root beer’s self esteem.
Now, now. Calm down. I am fine. I am not hearing voices from my foodstuffs. The apple pie is not telling me to kill people. But I do think that my root beer needs to be bucked up.


I speak of Diet Barq’s Root Beer. In my little opinion, it is one of the grandest, tastiest diet root beers in the history of diet root beers that come in a can (Stewart’s wins the all-around). So delicious is this diet root beer that even my husband - who involuntarily makes the face of a petulant baby when any artificial sweeteners hit his tongue - loves it. Not tolerates it. Loves it. Loves it to the extent that when it inexplicably became impossible to find in New York City, we started importing it from New Jersey.
For a long time, there has been a very bold statement emblazoned on the Diet Barq’s Root Beer can (along with the fact that it is Famous and Old Tyme and artificially flavored): It’s Good! 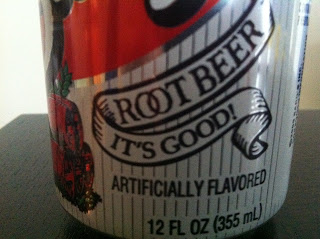 It is, in fact, Good! More than that, even. But I suppose for a can to promise anything greater would be dangerous. It is, after all, a mere carbonated beverage and not the very nectar that flows from Aphrodite’s teat. Even Coca-Cola, the #1 soft drink, knows this. Coke has never called itself Good! At best it’s been The Real Thing, The Pause that Refreshes, and It.
But I fear that Diet Barq’s Root beer has lost its confidence with its recent redesign: 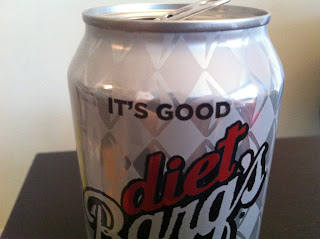 It is no longer Good! It is merely Good. (Not to mention that in addition to its nerve, it has also lost its serifs.)
And sure, it’s dressed up in a prettier harlequin design, but do you buy your diet root beer based on diamond patterns? I should hope not.
Words may be powerful, but punctuation is key. Case in point: Citizen Kane’s original movie poster boasted: It’s Terrific! And while it flopped in its initial release, and took many decades to reach the top of critics’ All-Time-Most-Terrific!-lists, Orson Welles never would have dreamed of dropping that exclamation point.  He’d sooner drop the entire phrase. Which he did (or at least RKO did) in the re-release posters. Once you mark something as an exclamation, you don’t want to take it back.
It’s Good
I see that and I think that maybe the root beer is lying, or that it’s actually a message from a table full of corporate suits: IT’S GOOD. SO IS SALT. TRUST US. YAY.
It’s Good!
I see that and I think, sure, the root beer might be lying because hey, people gotta sell root beer, but damn, that’s a confident root beer. And everyone knows that confident root beer is the very best kind of root beer: IT’S GOOD! COME ON! SERIFS ARE FUN! LET’S QUENCH SOME THIRST! YAY!
Yes. I just dedicated an entire post to a root beer’s ego. Now decide which phrase is more apt:
Stephanie is not normal.
Stephanie is not normal!
Exactly! Exclamation point! (Who wants to be normal, anyway?)
Yes indeed. Welcome to me.
Posted by Stephanie D'Abruzzo: blogmastrix, actress, and puppet-ette... at 12:05 AM