employee of the month

So here we are, and we’re winding down this summer arc about my stint at Burger King 20 years ago.
It was no secret to my managers that I was going back to college in the fall. But as my days at BK dwindled, my manager George made a comment that I carry with me to this very day:
It’s a shame you’re going back to college, Step... you could have gone all the way.
George called me “Step.” Not “Steph.” “Step.” It’s okay. Time has ripped my memory in such a way that I’m not sure whether George’s name was actually George or whether I’m remembering the wrong name but just now deciding it’s easier to refer to him as George and leave it at that. So “Step” is no big deal.
I don’t think anyone else has ever been told that it was a shame to be going back to college. Then again, I don’t think that anyone else had ever been working the drive-thru and had been waiting for four measly Whoppers and after realizing that no one was working the burger position because of a shift change, quickly washed and sanitized her hands and slapped together the four Whoppers herself, despite the full drive-thru headset gear weighing her down and beeping with the next impatient car’s order.
Of course, George and my other managers didn’t realize that I didn’t swoop into action because I was going above and beyond the call of duty. I swooped into action because when you’re face to face with people in a car who are waiting and waiting and waiting for their food, it is a no-brainer to want to get that food to them by any means necessary.
Other than this one instance, I really hadn’t done anything more than show up on time and do the jobs that were asked of me. I wasn’t the greatest clown. I needed guidance with a ham and cheese sandwich order. Mountain Dew devotees yelled at me. But, as I’ve mentioned before, the sheer fact that I could listen to directions and carry them out, whether that involved taking out garbage or refilling the iced tea carafe, made me a shining star in the Burger King firmament.
And so it was that on Friday, September 6, 1991, the day before my very last day of work, I was presented with my first professional award: 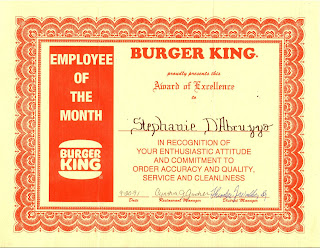 If you’ll note, it is dated September 20. That’s because normally the Employee of the Month would be announced on the 20th, and a bunch of certificates were signed and dated in advance. But mine was presented to me early since I was leaving. It was hard not to be touched by this honor, even though it was handed to me rather unceremoniously in a business-sized envelope. (If you look closely at the picture, you can see the fold marks.)
This certificate is the only thing I still have from my time at Burger King. The award came with a free meal (up to four menu items) and $25 in petty cash, which are obviously long gone. I didn’t even keep my name tag, because my exit paperwork warned that if I did not return my entire uniform, I would not receive my final paycheck, and I really needed that final paycheck.
I spent only one day, my last, basking in the Employee of the Month sun, but it wasn’t the happy lollipop experience that it was cracked up to be. For one thing, the special Employee of the Month badge was broken... so no one knew I was Employee of the Month. But that paled in comparison to the fact that my last day was spent working drive-thru. Drive-thru is a demanding position to begin with, but drive-thru on a sunny Saturday afternoon in a main-artery franchise that is only 30 minutes from the beach is insanity run amok.
A shift like that, with the drive-thru stacked for hours, can easily blur into a Vaseline-smeared haze, but the King wasn’t going to let me go without one more anecdote to top off my pivotal summer.
I was in the groove on an endless loop: take an order from a car at the order box, get the money from the car at the window, hand off the bag of food for that car, repeat, repeat, repeat. I had just taken an order (that’ll be eight fifty-eight, please drive around) and was turning to the van at the window when I was suddenly blinded in a random attack...
...of Silly String.
For twenty or thirty confusing and initially terrifying seconds I stood frozen at the window as a hisssss of foam annihilated me. When it was over, I opened my eyes to see a van (its higher seats providing the ideal eye-level angle of attack) of three or four total strangers, laughing hysterically. They weren’t teenagers. They looked to be in their late twenties, maybe even early thirties. They didn’t have a camera, so it wasn’t some sort of performance art or submission for America’s Funniest Home Videos, and they weren’t a bunch of kids playing pranks for no good reason. I didn’t know anyone in town, so it wasn’t personal, like some sort of “hit.” All I could figure was that they were either incredibly bored, or they were sociologists.
The laughter died down. They all smiled at me with anticipation. There was a beat of silence, then the driver finally spoke:
Well?
I’m not sure what they expected. Laughter, tears, anger, or some combo platter of emotions, probably. But I’m pretty confident that they didn’t expect me to shrug and say:
It’s my last day.
Then:
That’ll be fifteen sixty-five.
They looked at me in shock, faces blank, fumbling for a twenty. There was silence.
The drive-thru was beeping. I didn’t have time for this crap. I handed them their food and their change -- Thank You! -- and they drove off, stunned by their failure to get a rise out of the minimum-wager. I took the next order -- Thank you for choosing Burger King my name is Stephanie may I take your order? -- and got the money from the next car... the day went on.
It was an hour later, as the Silly String got crushed into the tile beneath me, before my manager Cindy came over and noticed the chaos of color at my feet. There had been absolutely no time to clean anything up. She looked panicked and angry.
What the hell happened here?
And I told her, in between punching register keys and making change:
Some random car sprayed me with Silly String.
You could tell that this had not been covered in any managerial training. She stood there for a second, and then asked:
Did you get their license plate?
God, she was a great lady. If she’d been there when it had happened, she probably would have called the police on my behalf.
And then it was over. The shift, the day, the job, the experience. Not with a bang, but a hissssss.
I need to remember that day more often. People never really stop doing random crap just to get a rise out of you. And thus Burger King has taught us another lesson:
When the evil ones try to push your buttons, it may be hard to ignore, but remember that there is an immense satisfaction in sending them off unsuccessful and perplexed.
This may seem like a good place to end this run of Burger King tales, but there’s still one more post left in me. Hang in there, kids.
Yes indeed. Welcome to me.
Posted by Stephanie D'Abruzzo: blogmastrix, actress, and puppet-ette... at 12:13 AM